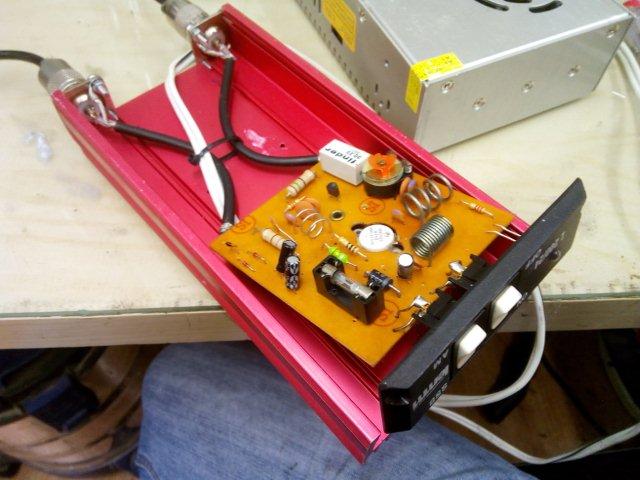 Surely this can be repurposed as an amplifier for use on 10m? That was probably my original idea? Hmm, I tried it out initially it seemed to work with a steady carrier, 100W+ out. But the input SWR was high, over 2.  I looked inside and saw the straight and long single core wires connecting the RF connectors to the main PCB. The designer had positioned the board as far away from the connectors as possible! There was a single big loop in the path from input to output - this must be the cause of the high input SWR at 28Mhz. I replaced the wire with coax and the SWR went down to 1.5:1. Much better. Then I tried some SSB. It was distorted, badly. Really bad. There had to be a significant amount of power input for the distortion to ease off.... hmmmm. I looked at the bias circuit at the base of the transistor. Some capacitors to steal a portion of the input rf, an inductor and 10 ohm resistor in parallel to ground. Class C! Bias derived from the input signal.That's no good for SSB.

I expect a lot of these amplifiers are the same, so here's how to make them into something usable on air. This is what we need at the base of the RF transistor: 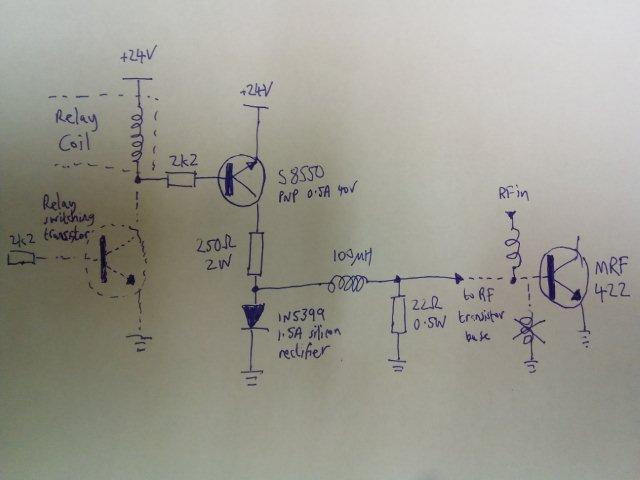 Remove the inductor installed to ground at the base of the RF transistor. We will be providing a steady DC bias, so any inductors to ground would short this out. There is also a 10 ohm resistor connected from base to ground on my amp. Change this to 22 ohm, this is needed to present a load, make input response linear and also control input SWR, but it also steals current from our bias voltage source. Unfortunately, making this resistor too high makes the response go non-linear, and too low pulls to much current from the voltage source which results in insufficient bias and/or enourmous power resistors. Neither of which are any good.

Connect a 1N5399 diode cathode to ground on the underside of the board, formed so that the diode body touches the heatsink when the PCB is replaced and/or the side of the transistor. This will develop 0.7V across it as it is forward biased which is perfect for just switching on the RF transistor. Connect a 100uH inductor from the base of the RF transistor to the anode of the diode. This feeds in the DC bias and blocks input RF from being conducted away to ground by the diode and distorted. Connect a 250 or 330 ohm 2W resistor to the anode. (I used three 750 ohm, it's what i had in a spares drawer. You can alter this value if the bias is not an acceptable amount.) Connect the collector of a PNP transistor S8550 to it. Connect the emitter to +V. Connect a 2k2 resistor to the base of the S8550 and connect the resistor to side of the relay not connected to +24V. (This assumes your amp uses an NPN transistor to pull down a relay coil connected to +V. The voltage developed across the coil switches on the PNP and hence the bias.) 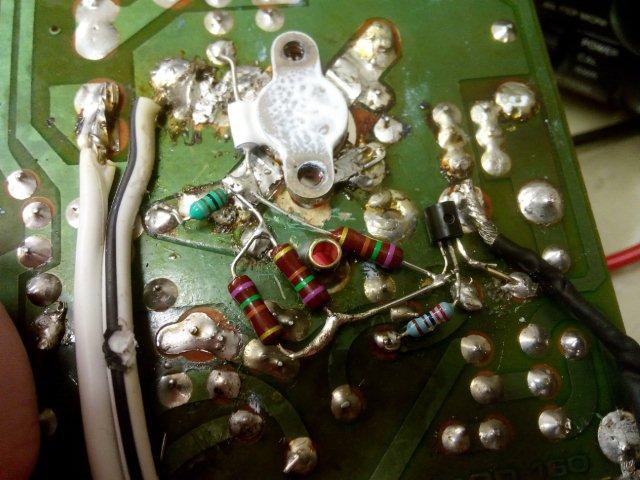 Use some crocodile clip lead from +V and a 2.2k resistor to switch on the relay via the resistor at the base of the relay switching transistor. Monitor the current. It should stay stable or decrease a small amount as the transistor heats. I initially used a UF1007 diode, this gave too much of a drop in current wrt temperature, and too much supply voltage bias variation. The 1N5539 was perfect. The current drawn remained fixed solid at 180mA (120mA bias, 60mA other consumption for relay, LED etc). There was some change in bias with supply voltage, but not enough to be a worry, it was well within a sensible amount, with supply increased to 32V. This isn't a precision reference!

Using a RF signal generator, or a radio that can smoothly generate small amounts of power from zero, very very slowly increase the input level. Increase the power level until about 700mA is drawn. Leave it running, able to switch it off at a moment's notice, e.g. using hand mic key. We need to check that the bias isn't going to run away or do something silly like blow up the RF transistor.

Allow the amp to warm up a little at this low power level. Keep an eye on the current, it should be stable and not increasing, providing the input is steady.

Turn off, swap the 1A fuse for a bigger one and increase the RF input a bit more. If all this seems ok. Remove the fuse and leave a 10A ammeter inline. Repeat the test with increasing input.

If it appears stable, ramp the signal up and down to make sure the response is linear. There should be no sudden jumps in power or anything clearly non-linear.

At this point, if no smoke occurs I think it's good to go. Put some SSB in and witness the linearity! Remove the board again and use some adhesive on the components to make sure they don't droop and short out on anything.

These amplifiers often have minimal filtering. There is a tuned circuit at the output of my amplifier, but it's probably best to assume harmonic attenuation is minimal. Use a 30MHz LPF to ensure harmonics are significantly attenuated. Luckily 30Mhz LPFs are readily available for HF TX intererence protection, so use one of these inline for peace of mind.

For better bias control, the following would be a good idea. I have not tried this, but it should work a lot better and be a lot more repeatable. The bias could be tweaked to suit and the current capability would be a lot more. 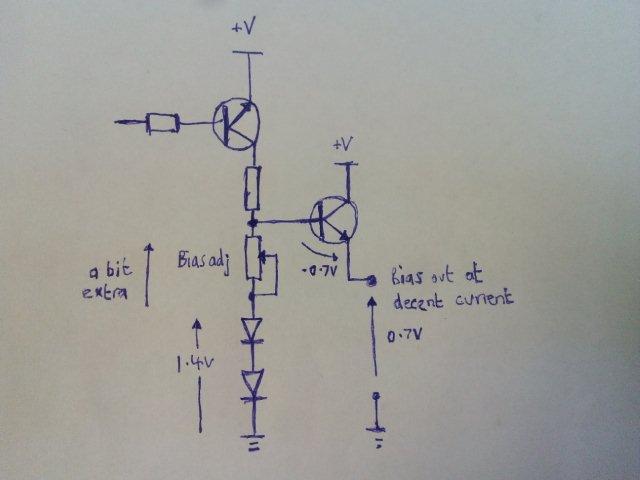